Current societal conditions have created an ammo shortage of epic proportions. With ammo so scarce and expensive, it’s important that new shooters learn how to properly “feed” their pistols. Since 9mm is the most popular caliber among new shooters, this post will identify the different 9mm cartridges, and explain how to read the information on a box of ammo. 9mm ammo

During shortages like this, wholesalers buy ammunition wherever they can find it, and much of it comes in from overseas. The cartridges might be named differently depending on where they were manufactured. In addition, That 9mm ammo you find sitting on the shelves might still be there because it’s a different type of 9mm ammo not compatible with most pistols. First, let’s make sure you get the correct cartridge.

Depending on where it was made, the common 9mm cartridge can have three different names. These are:

All three of these names refer to the same cartridge: The common 9mm – that was first chambered in the German Luger, that the Germans designed as a military cartridge (Parabellum is Latin, meaning “for war”) , and that features a case that is 19mm long (hence the three names for the same cartridge). 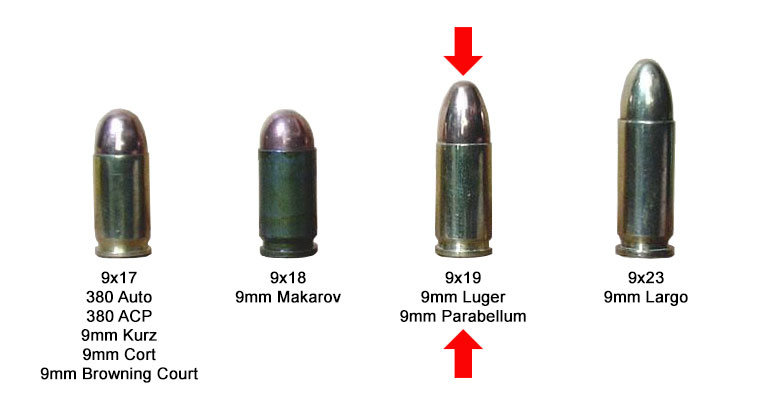 There are several other less common 9mm cartridges that are NOT compatible with most 9mm pistols:

Unless you have one of the unusual pistols described above, make sure the ammo you buy is 9mm Luger (most common designation in the US), 9mm x 19, or 9mm Parabellum.

Once you have the correct cartridge nailed down, the other info on the box describes the bullet weight and type (shape).

In addition to the cartridge designation, the ammo box will tell you the bullet weight and type (shape)

Bullet weight– This is the weight of the actual projectile – not the complete cartridge. The bullet weight is expressed in a unit of measure called “grains” (abbreviated “gr”). There are 7000 grains per pound, and 437gr per ounce. Common bullet weights for 9mm include 115gr, 124gr, 125gr, and 147gr. Generally speaking, heavier bullets hit harder, have more recoil, and are more expensive. Most people practice with 115gr ammo, and carry heavier stuff for personal defense.

Bullet Type – We’re about to enter acronym Hell. The bullet type is usually a 3-5 letter acronym that describes the shape of the bullet (projectile). Here’s Bullet Type 101:

The bullet shape is significant because you may find that certain bullet weights/shapes do not feed reliably through your gun. This is not unusual. Once identified, simply avoid that ammo in the future.

NOTE:
If you see the word “Subsonic” on a box of 9mm ammo, it means that the cartridges are loaded so that the bullet velocity does not exceed the speed of sound. These cartridges are intended for use in pistols equipped with a suppressor (a.k.a. a silencer). They’re usually loaded with 147gr bullets, and will function normally in most guns. They also tend to be more expensive than normal ammo.

If you see the word “Frangible” on a box of 9mm ammo, it means that the cartridges are loaded with bullets made of pressed powdered metal (usually copper) rather than lead. They’re intended for use when shooting steel targets at close range. They explode into dust on impact, and won’t cause ricochets. They tend to be very expensive, and should not be carried for personal defense.

If the ammo box is marked with the designation “+P”, this indicates that the rounds are loaded to a higher pressure than standard 9mm ammo, and should only be used in firearms designed for these cartridges. Refer to the gun’s user manual for this information.

I hope this clears up any confusion. If anyone has additional questions, feel free to contact me here, or message me on Facebook (Jim Finnerty).